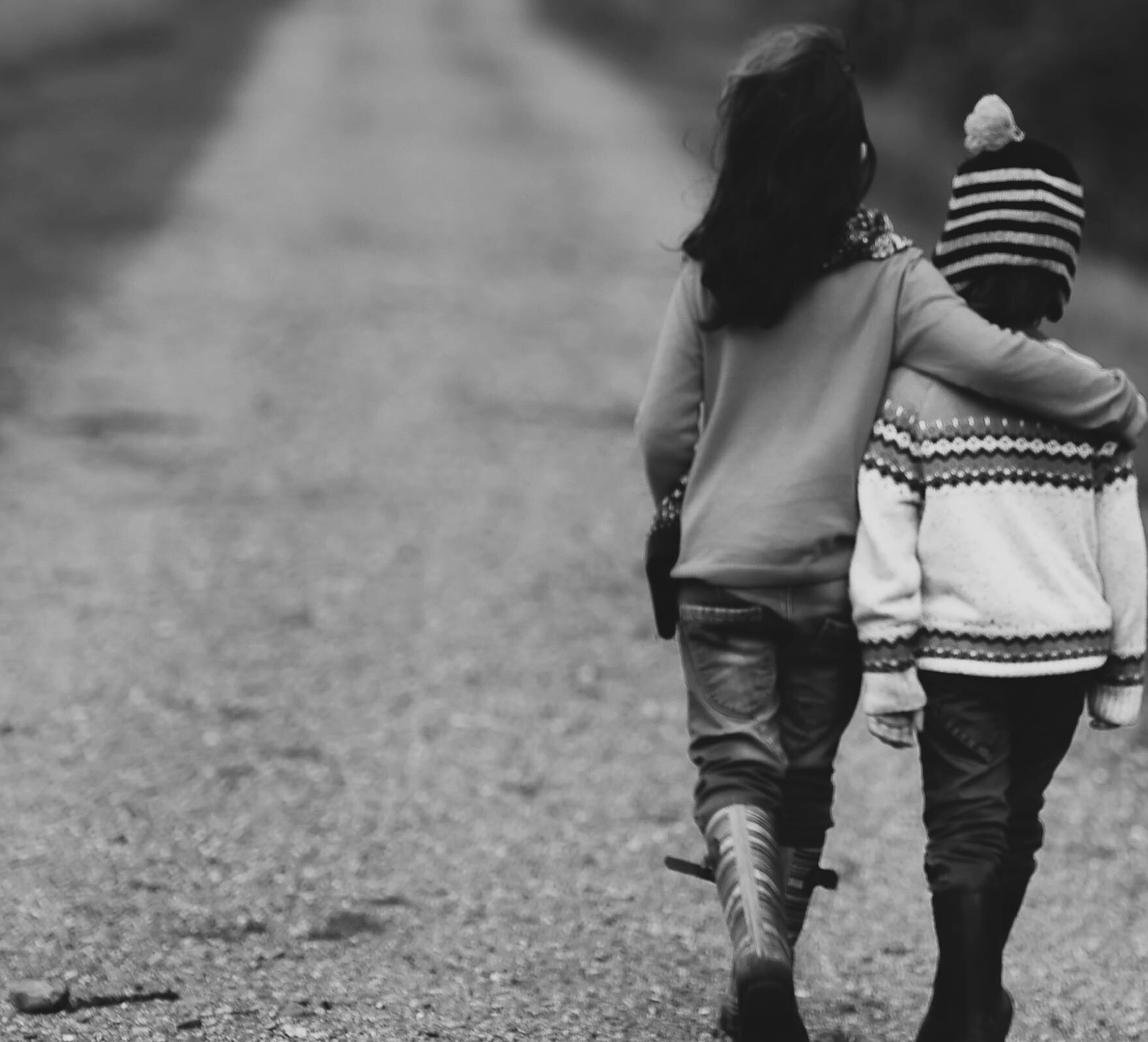 What Is Commercial Sexual Exploitation of Children?

Commercial Sexual Exploitation of Children (CSEC) is an epidemic in the United States. CSEC refers to situations where children are forced or incited to exchange sexual acts or images for material items such as food, drugs, clothing, and shelter. Other non-material items for exchange can also include protection, love, and belonging. This happens as a result of power, control, and manipulation. CSEC includes all charges of someone buying, trading, or selling sexual acts with a child. Sexual exploitation is a human rights violation.

Any sexual activity involving a child for which something of value is given or promised is an act of Commercial Sexual Exploitation. A person who takes photos without consent to advertise availability for sex online is considered an act of exploitation. Trading or selling child pornography is also a form of CSEC, which is estimated to have a $3 billion to $20 billion yearly profit globally.

CSEC includes the recruitment, harboring, provisioning, transporting, or obtaining of a child for the purposes of a commercial sex act. Although children of any age, gender, ethnicity, economic status, or sexuality can be at risk, national data shows some groups are more susceptible to commercial sexual exploitation. These groups include girls, children in welfare systems, LGBTQ+ youth, homeless youth, children in low-income communities, and children with previous trauma.

How Can This Happen?

Procurers, sometimes referred to as “pimps,” target vulnerable youth with histories of running away, abuse in the home, and neglect. Perpetrators often use controlling tactics such as manipulation, threats of violence, and false promises to hinder the minor’s ability to seek help. Victims are typically given false information by their exploiter and do not realize the deceptive nature of their situation until it is too late.

Unfortunately, prostitution of children can also be facilitated by the child’s parent or guardian, which is usually done in exchange for gifts, services, or money. Other studies have shown commercial sexual exploitation is a serious concern among the population in the child welfare system. Studies have reported 50-90% of CSEC victims have been involved in the child welfare system. The Bureau of Justice Statistics found in 2011 that almost 95 percent of sex trafficked victims were female with 54% being under 18 years old.

The media has been known to use terms such as “child prostitutes” or “sex workers” to describe a child being exploited for sex. This is detrimental in the prevention and understanding of CSEC. A child cannot legally give consent and therefore cannot choose to be a prostitute or sex worker.

Presenting youth victims as consenting participants leads to the stigmatization of victims, proclaiming they “chose” this way of life. Identifying victims of commercial sexual exploitation can be difficult due to a general lack of public awareness, reluctance of exploited children to disclose, and the extreme measures taken by perpetrators to hide their victims and crimes. 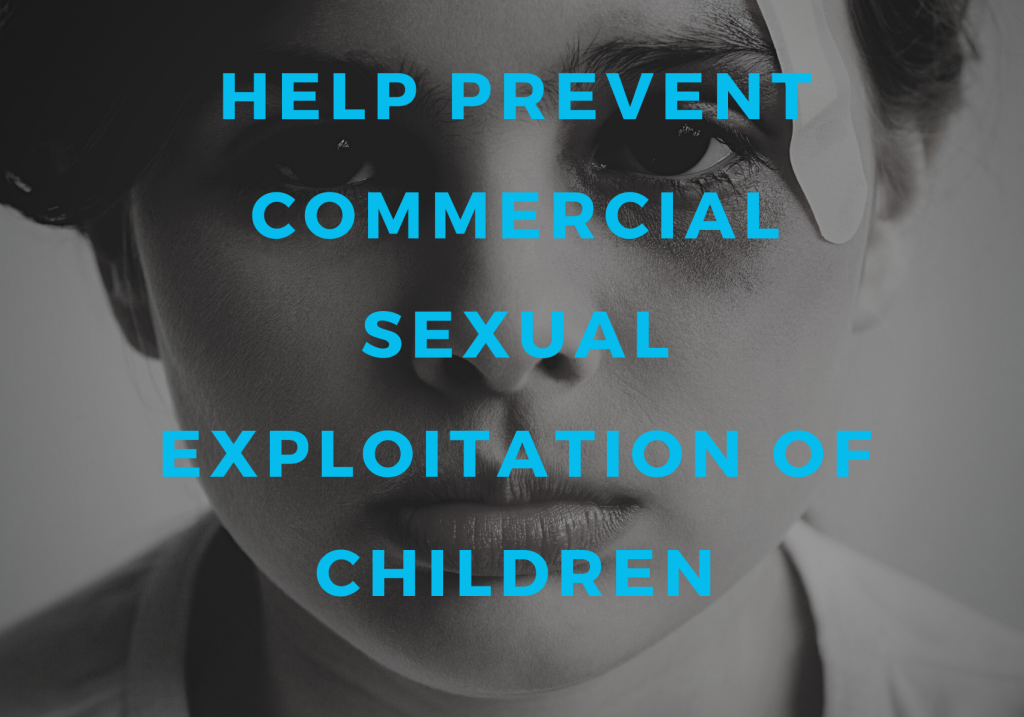 Explore our blog “How To Report Online Threats & Predators” for more information on how to report threats and predators. The National Center for Missing & Exploited Children (NCMEC) has a CyberTipline that we strongly suggest the public use to report online exploitation. You can also learn how to remove inappropriate images of you or your child from the internet or social media apps at www.missingkids.org/gethelpnow/isyourexplicitcontentoutthere. Perpetrators of Commercial Sexual Exploitation of Children outside of the home may rely on using social media to connect and communicate with potential victims. It is best for parents to be proactive and to monitor their child’s activity online.

What Can YOU Do?

We encourage parents and caregivers to be monitoring their child’s online activity due to the popularity in the use of social media by future CSEC perpetrators. Predators have been known to use social media to identify minors for sexual grooming and exploitation. Chat rooms and direct messaging are ways child predators are gaining access to children and building relationships based on lies and persuasion. Back in 2019, nearly 70 million images of child abuse were reported to the National Center for Missing and Exploited Children. The majority of this material was circulated on social media.

For the foundation of the prevention of child sexual abuse, Liberty House’s Prevention Services utilize Darkness to Light, a nationally available curriculum proven to increase knowledge, improve attitudes, and change child-protective behaviors.  We offer Darkness to Light’s Stewards of Children, which is a 2-hour training where adults learn the five steps to keeping children safe from child sexual abuse.  All of our prevention trainings are free to the community and available in English and Spanish.

In addition to Stewards of Children, we also offer Darkness to Light’s Commercial Sexual Exploitation of Children, which is a supplemental training that goes more in-depth into this complex problem—emphasizing that children who are sexually abused have a significantly higher risk of being commercially sexually exploited. Our monthly training calendar and the complete list of trainings offered by Liberty House’s Prevention Services can be found at www.irespectandprotect.com/trainings. 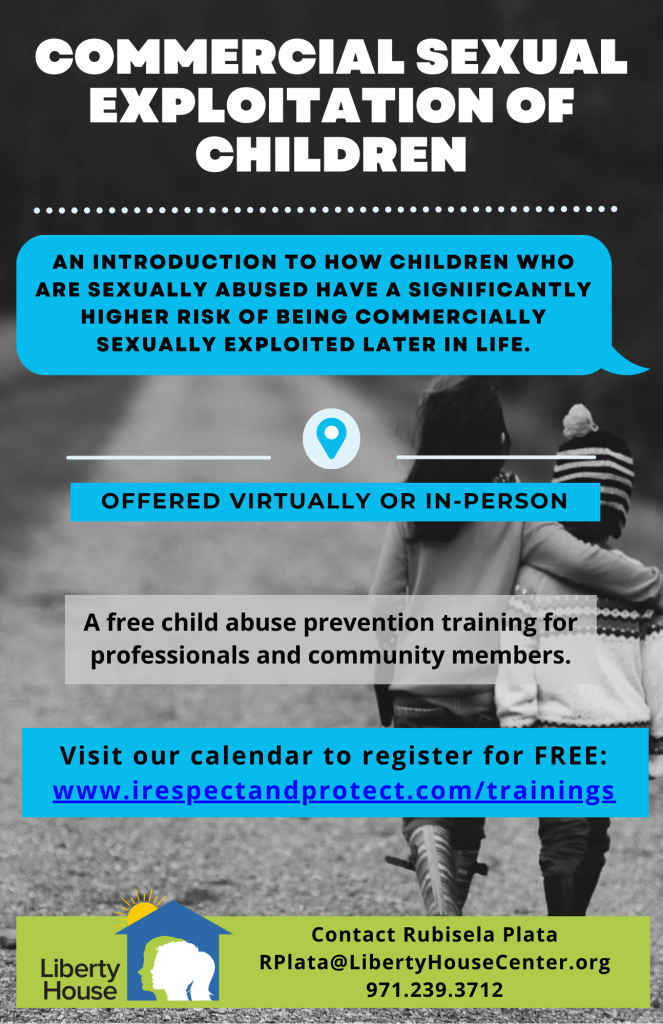 View our Calendar and Register to Attend an Upcoming Training!